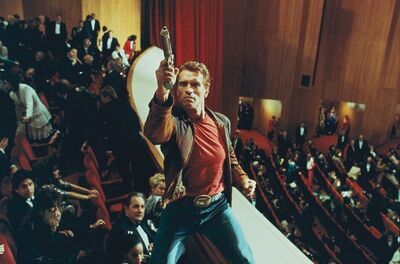 The Unloved is nine years old today. My creation is old enough to do basic math and bother people with limited knowledge of the world.  I remember bugging everyone I knew when I was that age with hastily written lists of my favorite films of all time (having seen a very impressive 300 or so of them by then). John McTiernan’s “Last Action Hero” would have been among them: a perennial rental, the kind of movie made for a media-junkie kid like me. I wanted to put myself back into my nine-year-old self’s shoes, but I also figured nine is a pretty big anniversary! Why not go big? And there is nothing bigger than “Last Action Hero,” a movie where the producers all but put a billboard on the moon (they got close, actually; they put the poster on an unmanned rocket fuselage, which cost $500,000) to advertise their enormous, excessive production. It had Arnold Schwarzenegger basically playing himself, the biggest American action director in the world in John McTiernan, a script with contributions from everyone from Shane Black to Carrie Fisher, and more explosions and shootouts than you could shake a stick at.  Naturally, something that big could only fail, but with James Cameron’s similarly too-big-to-fail “Avatar: The Way of Water” about to open this month, I say we celebrate hubris. The world needs more of it. Less proficiency and fan-servicing checklist monitors, more huge idiosyncratic anomalies. Here’s to everyone who swung for the fences, whether they connected or not. I also speak for a not-inconsiderable amount of people when I say it is high time for John McTiernan to get back behind a camera. I won’t get into the rather byzantine reason he’s been on hiatus, but the world needs him more than ever. American art needs risk-takers. Happy ninth birthday to the Unloved.