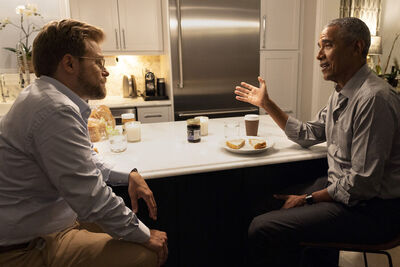 A recent tweet plaintively asked, “Couldn’t we get a Schoolhouse Rock for grown-ups?” A new series on Netflix called “The G Word” is pretty close. It doesn’t have singing and dancing animated legislative proposals and founding fathers, but it does have “investigative comedian” Adam Conover (“Adam Ruins Everything”) to keep things lively. And it has a producer who adds credibility by virtue of his extensive experience—including serving as the junior Senator from Illinois and two terms as President of the United States—Barack Obama, making a charming cameo in episode one, gamely trying to fill out his income tax forms. The series is also based in part on an excellent, if terrifying, book by The Big Short and Moneyball author Michael Lewis (The Fifth Risk: Undoing Democracy), an expert at putting the pill of math homework in the applesauce of entertainment.  I’ve been a Washington lawyer for decades, with eight years in the government, half when Democrats were in power, half with Republicans in charge. And it has been a great source of frustration that the role of the government, especially the role of the executive branch, is vastly misunderstood, even by educated people who read the newspaper. The President and Congress get most of the coverage. But it’s the executive branch that has the greatest influence on the daily lives of Americans. Even the longest, most complicated laws passed by Congress have all the details filled in by executive branch agencies like the Cabinet Departments and independent commissions with bi-partisan appointees. They also have responsibility for implementing all these rules, including bringing enforcement actions and imposing fines. The daunting task of this series is to take a story so vast (one out of every 16 people works for the government, reaching every single aspect of American life) that it is incomprehensible as a whole (even to the most dedicated inside-the-beltway policy wonks), and remind viewers that the failures and mistakes are the tip of the iceberg. The parts that work do so invisibly and thus everyone takes them for granted. Conover begins the episodes about food, disease, weather, money, future, and change with the good news, the overlooked stories of what works and the dedicated unsung heroes who give their lives to public service. Each begins with a problem that had to be solved. Tainted meat was making people sick in the early 20th century, and so the Department of Agriculture put inspectors in meat processing plants. The day I watched this episode there was a story in the newspaper about meat being recalled due to E. coli. You didn’t eat any of it because of those inspectors. Banks failed in 1929 and all the depositors lost their money. Now the FDIC insures bank accounts and we get to see what happens when a bank fails and all of the deposits are preserved. One of the most exciting scenes has Conover flying into a hurricane to see how the government gets the weather data you call up on your phone or watch on the news. Another official quietly explains how he made the decision to call a deadly 2020 storm “un-survivable.” They were able to evacuate 100% of the residents, saving everyone’s lives. Like others in the series, he explains why he does his job—to protect people. And then we move to the second half of each 30-minute episode, the failures. The government is better at setting up systems that work than protecting them from predation by businesses who want to profit from what has already been paid for with tax dollars. Conover astutely compares Accuweather’s efforts to charge for weather information collected by the government to bottling tap water and charging for it. None of the failures of government are heartless as the decision to provide critical information about an approaching storm only to the paying customers.  There’s also the massive agriculture businesses holding on to Depression-era subsidies, except that now instead of supporting struggling family farms they are pouring money into enormous and thriving corporations. A sequence about turning the government’s nutritionist-developed food pyramid over to corporations, so they could increase the recommended daily portions of wheat and cheese, is horrifying well. And then there’s the COVID-era PPP program, which, as so often happens, funneled money to the already-rich and powerful while small businesses were turned down without any reason or appeal. In another of Conover’s shrewd analogies, he compares it to flying standby on Christmas Eve while the wealthy go first class. Throughout, Conover helpfully includes citations about his examples to the Lewis book and newspaper articles for viewers who want to know more. If there’s a second season of “The G Word,” I hope Conover will explore further the distorting and corrupting effect of the post-Citizens United dark money, lobbying expenditures, and political contributions that bridge the first and second half of each episode. But for now, the spotlight on what works and the exploration of the pressures to dismantle it are presented clearly and compellingly, with a wistful nod to Tinkerbell. Like Peter Pan’s fairy friend, Conover says, if we don’t believe in government, it dies. We cannot believe in it if we do not understand it, and “The G Word”‘s depictions of the best and worst of government are a welcome first step. All of season one screened for review. “The G Word” premieres on Netflix on May 19th.