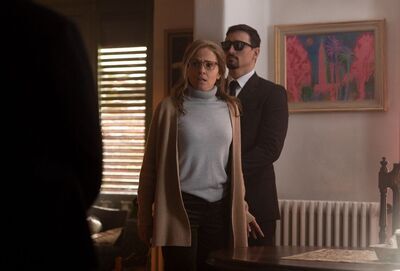 You should never underestimate how much a decent twist can give momentum to a story. Let “In from the Cold” of all things prove that to you, if you do decide to give it a shot given that Netflix can pitch it any way you want—superpowers? An uncool mom revealing her secret bad-ass history as a spy? An exotic vacation in Spain? Skating team rivalries? Triple-crosses and head-smashing action scenes? It’s all a part of the light but amusing-enough experience of this series from showrunner Adam Glass, which doesn’t get any points for dialogue or character, but does for plotting. This baby exists for twists, and it is notably good at conjuring them.  “In From the Cold” opens with nonsensical violence, which is kind of perfect for a series that’s most concerned with light shocks. One guy with a strange look in his eye suddenly throws another dude off a rooftop at a swanky party; somewhere else in Madrid, another fellow acts racist toward a Black passenger before promptly getting kicked off the bus and chased. Then, a baby is stolen before the thief is also thwarted. What could have caused such impromptu acts of terror?  Cut to Jenny (Margarita Levieva), who is in Madrid with her daughter Becca (Lydia Fleming) and her figure skating team of future Olympians. Her daughter thinks her mom is totally uncool and strangely cagey about her past, setting a mother-daughter relationship arc in motion. And then suddenly, when Jenny is taking the elevator at their hotel, an intern-looking guy in a suit throws a smoke bomb before the doors close, knocking her out. She wakes up trapped before a group of henchmen. Jenny is interrogated about being a Russian spy and denies it all, until she suddenly uses her deeply engrained fighting skills to kick-ass for her life, and then find out she’s in something of a training facility. She has been tricked out of hiding by her new boss, a dapper CIA man with a flat way of trying to sound grave and a name that really doesn’t do his character any favors—Chauncey Lew (Cillian O’Sullivan). Chauncey with his computer whiz Chris (Charles Brice) are able to coerce and support previous spy Jenny, as she traces a plot against the Spanish prime minister to violently right wing Spaniards and her own hidden past.  Did I mention that Jenny has a superpower that Netflix doesn’t want critics to mention until the show premieres? Or that the series’ title card spells the “O” of “Cold” with a hammer and sickle, that then then gets shot with a bullet, and bleeds? Much of the storytelling of “In From the Cold” is of the “sure, why not?” variety, more than a regular spy story. But as long as we are amused, as long as we still feel like we’re on an opulent getaway just like Jenny and Becca, it proves to be enough. “In From the Cold” throws so much at us at such a fast pace it can be hard to resist when you’re at all curious.  Of the many juicy pieces that are in motion in “In from the Cold,” it’s the flashbacks to younger Jenny (known then as Anya) that just aren’t as intriguing. We see how she got her reputation as an assassin called The Whisperer, and the forbidden relationship she had with another young woman named Faina (Anastasia Martin)—a facet that the story treats with care and time. But the dialogue is of course overt and goofy here too, like when Anya’s boss Svetlana (Alyona Khmelnitskaya) says “You are a BITCH FOR MOTHER RUSSIA!”, because if the other characters are going to be so broad, why not go for the icy Russian? But “In From the Cold” cuts back and forth to this, for extended periods of time, and it’s more of a distraction to the better paced Jenny action happening in the current timeline.  “In from the Cold” is a series that plays a relatively plain game, relying on flat characterization, fairly broad performances, and dialogue that either never lets go of your hand or winks right at you (“What is the big secret? You act like you’re some secret spy or something!” says Becca). But the action is sincerely, seductively good, and it helps counter the more greedy, thankless cheese. Margarita Levieva has numerous scenes of impressive fight choreography, going tête-à-tête with stunt performers who also bring the heat. It’s enough to make you wish to see Levieva in future projects that you could take a little more serious.  All episodes of season one screened for review. The first season of “In From the Cold” airs on Friday, January 28th.