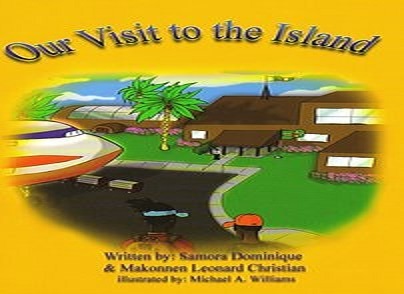 Our Visit to the Island

Our Visit to the Island is the first work by eight (8) year old Samora Dominique Christian, with the assistance of her six (6) year old brother Makonnen Leonard Christian. Born in Maryland of Dominican parentage, the children visited the Commonwealth of Dominica, known as the Nature Island of the Caribbean, for the first time and fall in love with its people and culture. That love had deep roots, however, as we learn that the children drew much inspiration from their Dominican born parents Gabriel and Joan Christian, who had immersed them from early on in Dominican and Caribbean community events.

While on the island they explored the rain forest, met new friends, tasted exotic fruits and dishes and enjoyed wading into the island’s many rivers. However, they also act out their sense of civic duty by donating books at the near century old Roseau Public Library which nourished their parents, and medicines to the local general hospital. Delightfully illustrated by Maryland graphic artist Mikel Williams, with photos from Major Francis Richards among others, we are introduced to life on a fascinating and little known Caribbean island. Our Visit to the Island is an excellent read and a good introduction for anyone interested in the Caribbean and its people.