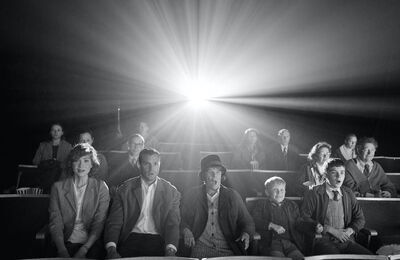 A Look Back at the 2021 Middleburg Film Festival

The show went on, pandemic be damned! This year, the eighth Middleburg Film Festival was able to lure cineastes to view movies on the big screen again. Like many film festivals, this celebration of cinema—which has been held amid the scenic autumnal splendor of the tiny Northern Virginia town of Middleburg every October since 2013 at the luxurious Salamander Resort—was forced to go virtual in 2020, save for a make-shift outdoor drive-in screen, due to COVID-19 pandemic restrictions. And just like most such festivals, Middleburg loves to give awards. This year, the Audience Award winner for Best Narrative Film was director/writer/producer Kenneth Branagh’s nostalgic coming-of-age tale “Belfast,” which will be released this fall by Focus Features. The audience’s pick for Best Documentary Film went to “The Rescue,” a National Geographic release directed by Elizabeth Chai Vasarhelyi and Jimmy Chin, the Oscar-winning team behind “Free Solo.” A glitch arrived early when the screen at the town’s community center decided to go boom during a showing of “The Rescue,” which covers the against-all-odds story that mesmerized the world in 2018: the dangerous rescue of twelve boys and their coach from the deep. But the crack team of Middleburg volunteers soon swooped in to save the first showing of the fest. Alas, we are still living with the effects of this horrible disease. But the savvy founder of the festival, Sheila Johnson, who created this exquisitely curated yearly event on the advice of Sundance fest founder Robert Redford, decided to employ the same protective measures used at Telluride and other earlier fests to safeguard attendees. Namely, we had to show evidence of being vaccinated as well as a recent negative test. For our efforts, we were given wristbands that confirmed our COVID-free status. Meanwhile, a cap on ticket sales helped maintain a safe distance among film-hungry fans. Yes, you had to wear masks during the screenings. But on the upside, the four make-shift venues that serve as theaters, which have been uncomfortably jam–packed in earlier years, allowed for more comfort and breathing space in the seating placement. Speaking of awards, it was more than worth it to swab your nose in order to see some of the year’s cream of the crop that will likely be contenders for gold trophies. Ever since 2016, when actress Emma Stone and writer/director Damien Chazelle made an appearance at the festival to promote “La La Land,” Hollywood has been taking note of this festival’s influence during awards season set in a wealthy community tied to Washington, D.C. Consider that after winning the highly coveted People’s Choice Award at the Toronto International Film Festival, Kenneth Branagh brought his acclaimed “Belfast,” based on his own working-class childhood during the troubles in the Northern Irish city, to this town of slightly less than 700 residents. Of course, it helps that he received a Director Spotlight Award for his efforts. During a Q&A that followed conducted by Washington Post critic Ann Hornaday, Branagh, who also wrote the script, talked about how being in lockdown made him think about a life-changing event—actually a terrible sound—from 50 years ago. His film was influenced by other coming-of-age movies from the past, such as “Hope and Glory,” “Empire of the Sun” and “Au Revoir les Enfants.” He also borrows a term from Spanish director Pedro Almodovar, who coined the phrase “auto-fiction” to describe his semi-biographical 2019 film “Pain and Glory.” Other in-person celebs mingling about included Ann Dowd, whose acclaimed and highly topical “Mass” opened in theaters this weekend. She plays a mother whose high-school son shot to death 10 children in his class before killing himself. Years after the deadly incident, she and her ex-husband meet with a couple as the four characters try to hash out the circumstances that led to that horrible day. She was bestowed by the fest with its Agnès Varda Trailblazing Film Artist award. There was even a tabloid-ish photo op given the presence of Dakota Johnson, who is part of the ensemble of actors starring in actress Maggie Gyllenhaal’s directorial debut, “The Lost Daughter.” She brought along her boyfriend Chris Martin, frontman of Coldplay. They strolled amongst the attendees while enjoying the relaxing atmosphere at the resort. Other notable lingerers in attendance were Diane Warren, the 12-time Academy Award nominee in the song category. She was a participant in a “Women in Film Music Conversation.” Meanwhile, Christopher Fox—the 80-year-old composer of such classic TV themes as “The Love Boat,” “Happy Days” and “Laverne and Shirley” as well as such film scores as “Nine to Five” and “Foul Play.” The songwriter was given the Legacy Composer Award and also participated in a tribute concert.