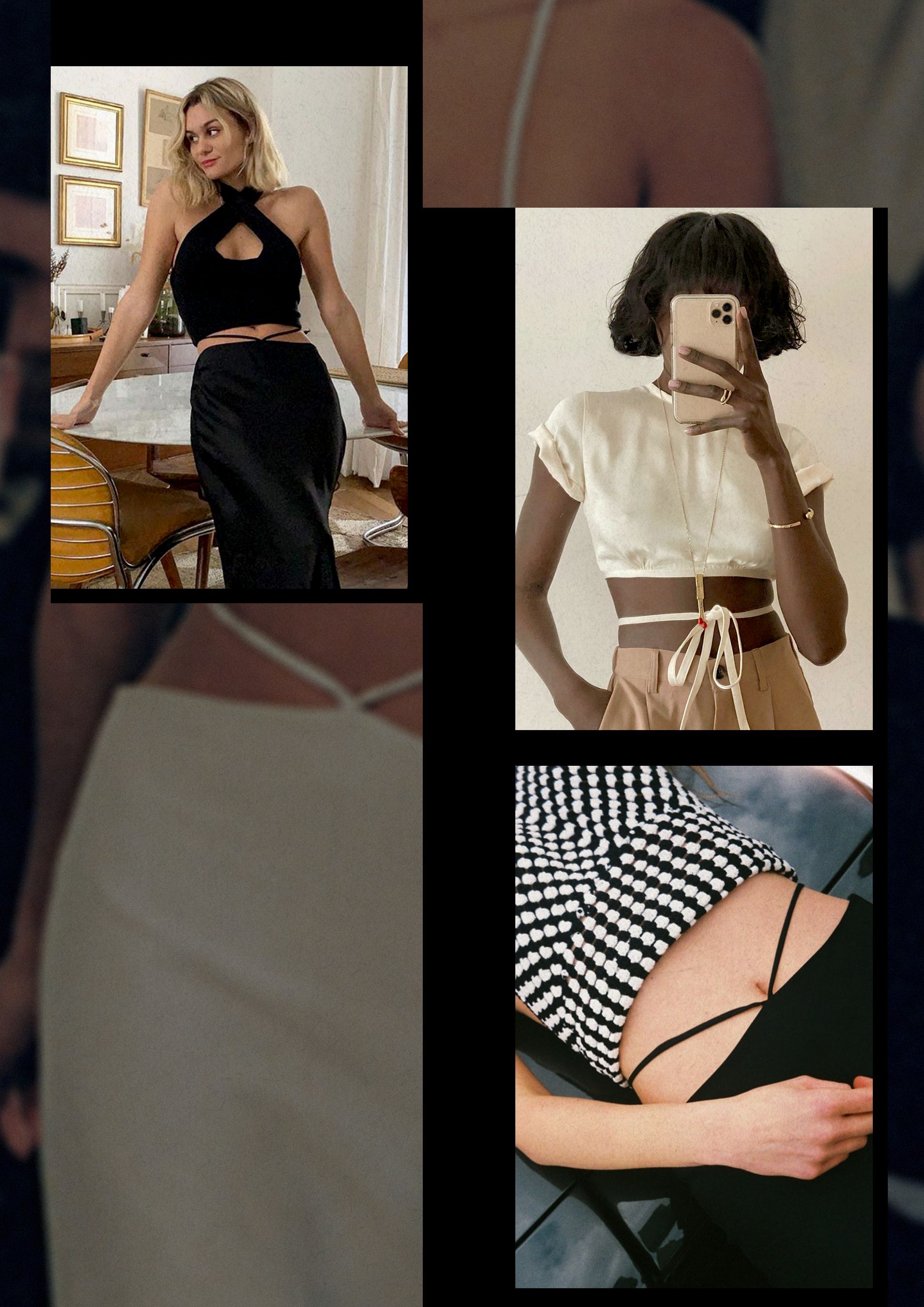 Ready or Not: This Revealing Trend Is About to Freak Out the Fashion World

No, seriously—whether you’re ready or not, this micro-trend is swiftly marking its territory as one of the hottest styles to try this spring and summer season. The trend we speak of is better seen than described, but if we had to try it’s basically any article of clothing that slinkily ties and wraps around a bare midriff. These wraparound ties can be connected to a top, skirt, or even swimwear, which we’re anticipating seeing a lot more of come summer 2020.This trend was unsurprisingly very prevalent in the ’90s (which you can see via the Prada F/W 92 runway image below) when skin-baring silhouettes were pretty much all anyone cared about. As we encroach on warmer weather, we’re predicting that this micro-trend is about to make it big once again in this decade. Influencers have already started wearing it and retailers are already hopping on board. If you ask me, this is the beginning of a major trend in the making. If you’re feeling hesitant to try this one out, we don’t blame you—wearing little strings tied around your bare midriff is pretty daring. However, after taking a look at all the ways It girls are already sporting the risky trend, you might be convinced. Scroll down to observe this trend on the runway, on Instagram, and shop a wide selection of our favorite items so you too can get in on the style.Spotted on the runway not only this season but also way back when on the fall 1992 Prada runway, was this tied-up waist micro-trend. Considering the resurgence of the ’90s (yet again) this year, the resurfacing of a trend like this doesn’t feel far off at all. But let it be known that Prada did it first.  Pictured: Prada F/W 92Pictured: Christopher Esber S/S 20Naturally, some of the industry’s leading ladies have already been dabbling in the trend via crop tops, skirts, and swimsuits. Already, the array of styling techniques is convincing us that this trend is way more versatile than we initially anticipated. On Alyssa Coscarelli: The Garment top (launching soon) On Anne-Laure Mais: Musier Paris Skirt Romance ($125)On Cass Dimicio: Orseund Iris Le Club Cropped Satin Top ($330)On Bella Thomas: Matteau The Wrap Triangle Top ($135)Pictured: Musier Paris Skirt Romance ($125)On Ellie Delphine: Orseund Iris Le Club Cropped ($330)On Rocky Garcia: Solid & Striped bikini On Amy Julliette Lefévre: Orseund Iris Le Club Cropped Satin Top ($330)This trend has already infiltrated the market in many forms including skirts, crop tops, bikinis, and more. We recommend opting for the crop tops and long skirts for spring. Come summer, really go for it with the bikinis, minis, and everything in between. Next up, shop the eight wardrobe basics that are officially trend-proof. Next up, shop the 25 finds this editor is obsessing over now.